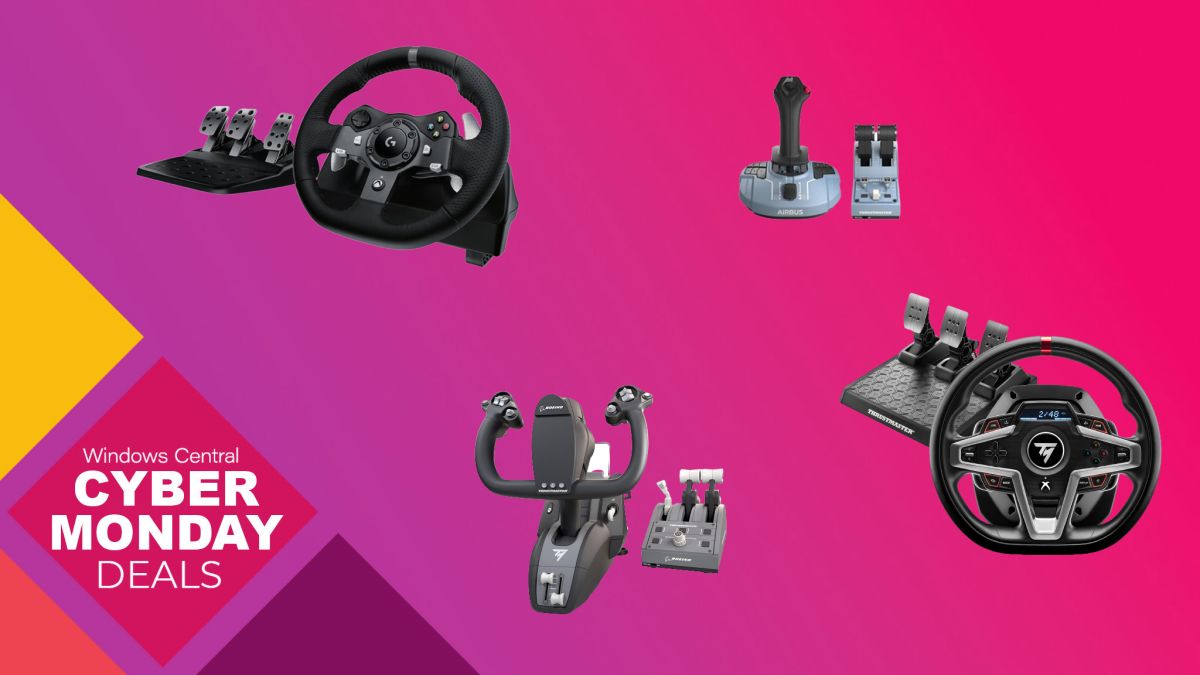 A standard controller or mouse and keyboard setup will get the job done in virtually any game. However, for Black Friday and Cyber ​​Monday, treat yourself or someone in your life to one of the best deals on a flight sim yoke or racing wheel for Xbox PC that will elevate the experience and immersion in your favorite racing game or flight simulator.

Our top pick for the best Black Friday and Cyber ​​Monday deal for a racing wheel is none other than the Logitech G920 Racing Wheel for Xbox and Windows PC. Yes, this is an older model, but while the newer G923 is still hard to find in spots, even at retail price, the G920 is still a fantastic mid-range racing wheel with great controls, build quality. and set of functions. It is also fully compatible with many of the best racing games on Xbox, such as Forza Horizon 5.

Need something a little more premium? The Thrustmaster T248X racing wheel for Xbox and Windows PC outperforms the previous Logitech G920 by incorporating a hybrid force feedback system for superior immersion and an integrated LED display for on-the-fly setting changes. This is a new racing wheel, by industry standards, so it’s surprising to see it with such attractive Black Friday and Cyber ​​Monday discounts.

The Turtle Beach Velocity One Flight Control System for Xbox and Windows PC is the ultimate all-in-one setup for Microsoft Flight Simulator gaming, featuring a high-quality yoke and throttle quadrant integrated into one cohesive unit. You can expect great controls and customization, though Velocity One is really designed for use with Microsoft Flight Simulator, so your experience in other games may differ from its normally unmatched standard of quality.

Those looking for a more premium flight sim yoke, or something that’s also compatible with Xbox Series X and S, as well as Windows PCs, look no further than the Thrustmaster TCA Boeing Edition. This set is inspired by the iconic Boeing 787 airliner and includes a stylized yoke and throttle dial, perfect for smooth flights in Microsoft Flight Simulator and beyond. While this is normally a pricey set, a Black Friday and Cyber ​​Monday deal is slashing more than $100 off its retail price.

Racing wheels and flight sim gear can be expensive to the point where casual gamers are unobtainable, but there’s still a fantastic budget option to consider for Black Friday and Cyber ​​Monday. The entry-level Thrustmaster T-Flight HOTAS One for Xbox and Windows PC is a simple affair for your time in Microsoft Flight Simulator or other titles, but it will certainly get the job done and offers great value for money.

A new racing wheel or flight sim yoke is a great way to take advantage of the best Black Friday and Cyber ​​Monday deals for Xbox and PC gaming, but that’s not all enjoying deep discounts this time around. of the year. There are plenty of ways to maximize your savings and take care of yourself and the people in your life around the holidays, like with our favorite Black Friday and Cyber ​​Monday deals on gaming headsets.

Also looking for a more traditional controller in addition to your new racing wheel or yoke? A plethora of Xbox and PC controllers for every budget and use case are being discounted for Black Friday and Cyber ​​Monday. As long as you get it from Windows Central, you can’t go wrong — we make sure every deal and every product is great, including amazing savings on gaming laptops with flight sim capability.

Alec Mullins ❘ Published:...
Read more
Previous article
James Gunn says DC games will be part of the larger universe in the future
Next article
Why are the last matches of the World Cup group stage played at the same time?