The best Steam Deck games to play over the holidays 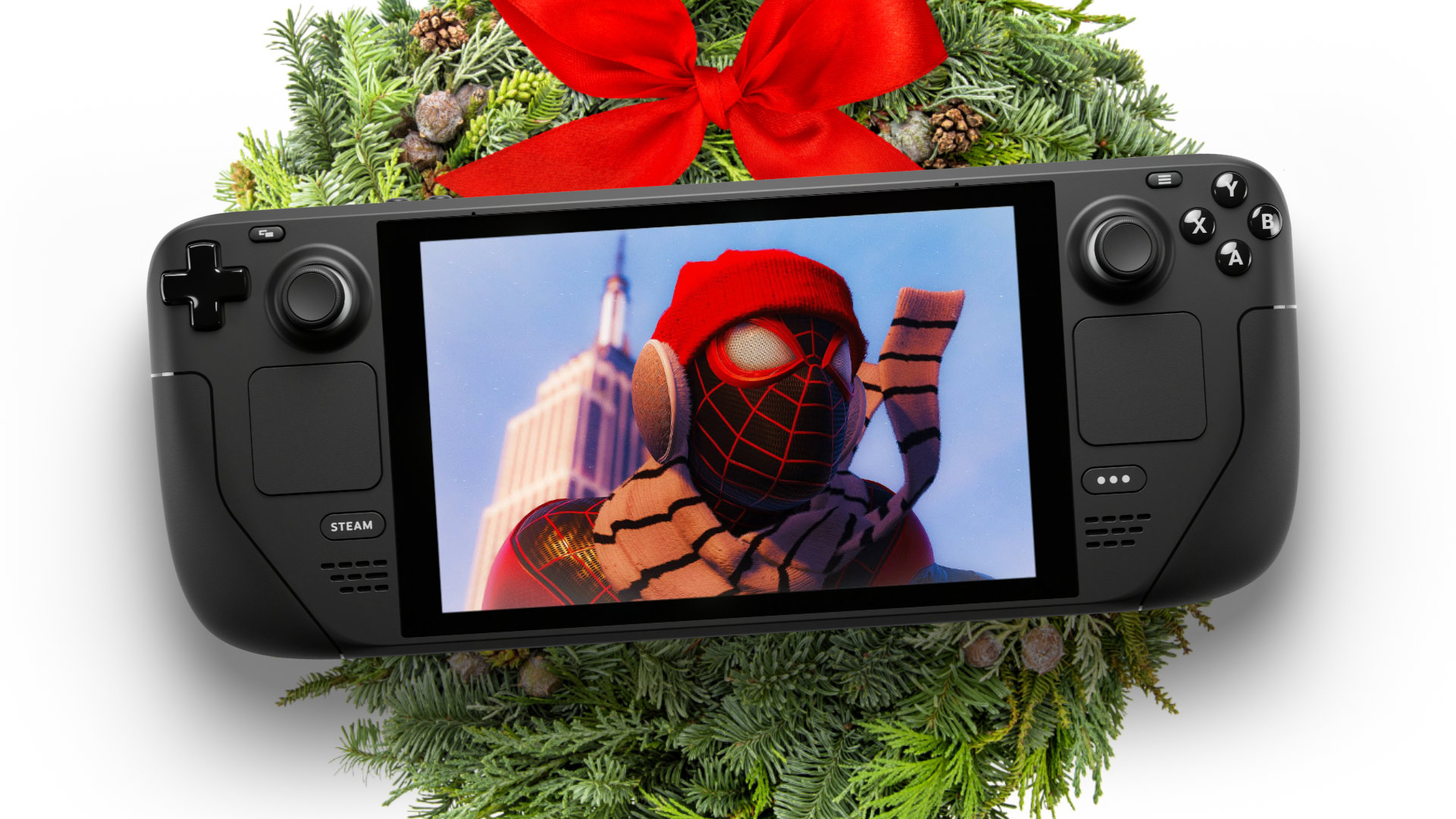 The Steam Deck is the best Christmas gift of 2022, but once you’ve unboxed the gaming laptop PC and wiped away a single tear after admiring its beauty, you’ll need a few games to play. Valve has done a lot of work to tell you what’s supported and what’s not supported by Verification, but this traffic light system only goes so far.

Some games are better on the go instead of being confined to a keyboard. Others work well regardless of whether you’re attached to the best Steam Deck base or roaming around. What better time of the year to set aside some time to sample those lost gems?

Not all of our suggestions are festive, but it wouldn’t feel right if we didn’t start with a real Christmas game. It’s set during the last months of the year, there are Christmas trees… count, and while we’re at it, Die Hard is a Christmas movie.

Regardless, Marvel’s Spider-Man Miles Morales is one of the best action-adventure games around and picks up a year after the first, starring a new homegrown web-slinger roaming Harlem. If the original is like a hearty holiday feast, the kind that needs at least half a day to digest, then Miles Morales is the part of the day where you gorge on smaller, equally delicious bites. Bitesize but still brilliant, with a shorter runtime plus new and improved mechanics.

Despite its smaller scope, it’s impressive that Insomniac Games and Nixxes Software manage to earn the coveted green Verified mark. You may not need to dial back a few settings and stick to a 40fps frame rate cap, but it’s amazing that we live in a time where we can take a full desktop game outside. 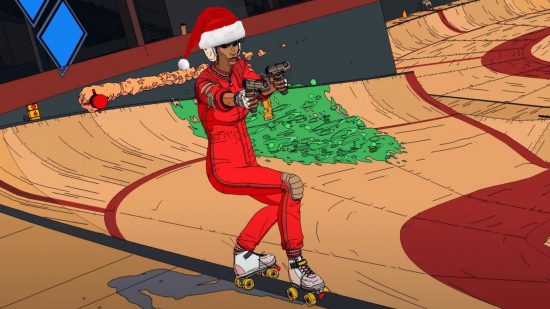 Santa didn’t bring you that pair of skates you wanted? Don’t worry, Rollerdrome is here to fulfill your rolling dreams, albeit with a dystopian twist. Best of all? It’s perfectly playable on the Steam Deck, so you can enjoy the closest thing to Tony Hawk with Guns without leaving your holiday dinner table.

Rollerdrome is many things, but it will ultimately make you feel like a badass while wearing that flashy Christmas sweater your grandma foists on you. Not to sound like a broken record, but Roll7’s high-score shooter plays like a violent version of Pro Skater, while its shaded visuals help it stand out on the vibrant Steam Deck screen. Performing tricks before shooting opponents in the face with various weapons is exhilarating, and you won’t find anything like it in the Valve store.

It’s addictive, it’s exciting, and if you haven’t put Rollerdrome on your Steam Deck yet, do it before Saint Nick slides down your chimney. Keep in mind that if all of the above sounds too stressful, you can enable assists that will help you roll with ease. Keeping things relaxed is what Christmas should be about, so we won’t judge you for not chasing high scores. 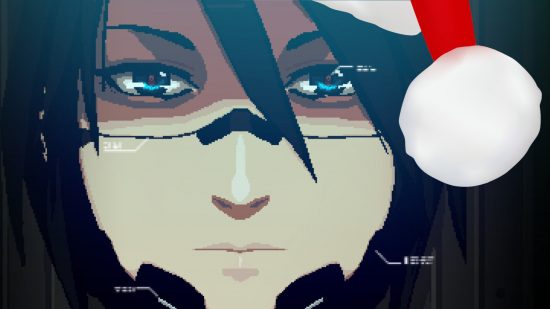 What’s better than curling up on the couch with a handheld this Christmas? Snuggle up with a spooky PS1-style outing that’s crying out to be played on the Steam Deck, of course! Signalis is a third-person horror game that combines Ghost in the Shell vibes with classic tank controls, and we’re absolutely here for it.

If you’re a fan of horror classics like Silent Hill and Resident Evil, picking up Signalis on the Steam Deck is a no-brainer. The experience honors the mechanics of yesteryear, such as inventory management and rotating gunfights, but is mixed with a menacing aesthetic that manages to feel familiar and brand new.

It’s true that Signalis isn’t very festive, but if you’re the type of player who would choose to see Krampus over Miracle on 34th Street, you’ll want to include it in your Deck. Turn off the lights and feed yourself with Christmas chocolate as you venture into one of the best indie games of 2022. 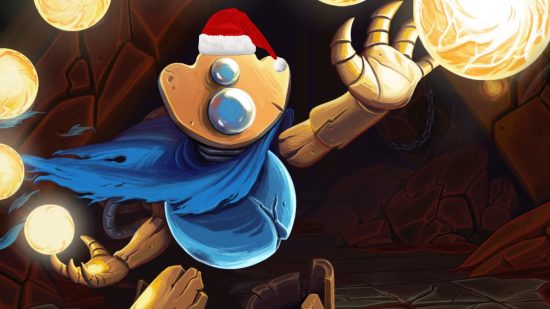 Christmas can be one of the busiest times of the year, so it’s always a good idea to have a game that can be played in short bursts like Slay the Spire. That said, you’ll want to keep an eye on the clock as you play, as this card-based rougelike can be quite addictive, and you don’t want to be the culprit of a seared holiday dinner.

Slay the Spire makes a great Steam Deck any time of year, but discovering the hidden dangers and delights of the titular spire should keep that feeling of anticipation going after you’ve opened all your presents. Just be prepared to find as many powerful cards in your runs as there are enemies hoping to spoil your holiday spirit. 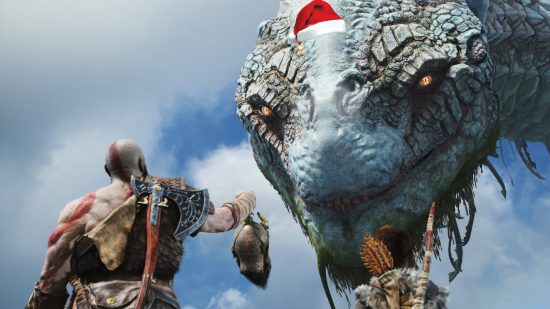 If you’re looking to sink your teeth into an adventure as meaty as any Christmas party, complete with a bearded father figure, look no further than God of War. The action-adventure game does surprisingly well on the Steam Deck, which seems to be a recurring theme for Sony games coming to PC, and its narrative theme of family versus a snowy Midgard feels appropriate for Christmas.

Don’t be fooled by its bloodthirsty battles, the strength of this age-old PlayStation exclusive is equally matched by your brain and, more importantly, your heart. Check out our God of War review for a more detailed look at what makes this Norse romp so epic.