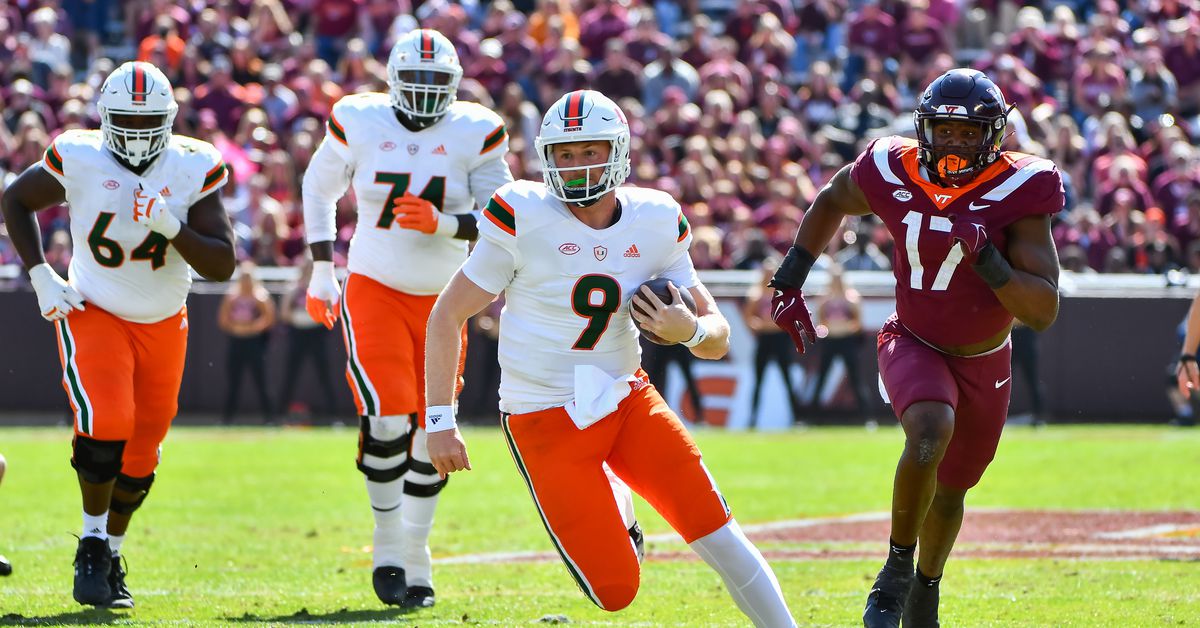 The Miami Hurricanes took a 20-14 lead against the Virginia Tech Hokies on Saturday afternoon. If you couldn’t make the trip to Lane Stadium, you had to use interesting means to broadcast the game…so thanks to ESPN and the ACC! The Duke game will have the same setup, so hang in there and find a good stream or bar type establishment.

Canyonero’s keys to beating the Hokies were:

1- Contain Wells. Wells scored on the ground, but the interior defensive line improved dramatically when it comes to running fit and passing lanes. The days of stunting 3 gaps to allow the QB room to step up and run for a first down are almost over. The D-Line did a great job of keeping Wells in the pocket and then closed when he came up to run.

2- In attack, don’t get greedy. The offense stalled once it became a deep ball fest or fizzled out. Van Dyke doesn’t try Sam Hartman’s low shot for a PI deal, usually missing long against short. I remember the Drive concept we previewed once, and Skinner was stuck in the lane but still made it open, just one step late. OC Josh Gattis and QB Tyler Van Dyke simply went deep.

3- Stop the race. Malachai Thomas rushed for just 41 yards on 13 carries and no TDs. I’d say Miami stopped the race. The ‘Canes added another seven TFL’s. Trying to hammer out an inside running game doesn’t work as well against Kevin Steele as he has in the past. Akheem Mesidor and Jahfari Harvey defended themselves in Miami.

Some of the most revealing data was on third downs. VT finished 4 of 15 mostly on knockdowns or just inexplicably errant open shots. Miami was a solid 8-for-17 on the day, holding to its approx. 45% conversion rate.

This turned into an unreasonably close game after Miami’s offense made just one field goal in the second half. 17 penalties for 159 yards didn’t help the case, as many were false starts by the offense.

Miami timed the battle for possession, good for OC Josh Gattis! Virginia Tech had the only turnover on the catch and run that Avantae Williams forced and recovered.

Van Dyke cooled off in the second half as the fade path wasn’t as wide open as it was in the first half. Van Dyke finished with 7.6 yards per attempt and two touchdowns with no turnovers. Miami rushed for 100-plus yards as a team, a stark contrast to old-school Josh Gattis, Michigan, and what they did against an unbeaten, ranked Penn State.

Up– Miami on a look at quads (4 receivers aside) early. The inner bubble to #4 (the fourth receiver) works, the perimeter blockade is activated. It’s always good to start with easy pitches that have a read. Get the QB comfortable and confident.

Up– Colbie Young and Van Dyke are starting to have something going. I mean, giant receivers who can run and have strong hands are always a good thing. Van Dyke hits his pace route perfectly there.

Up– I couldn’t take a good screenshot, but Van Dyke had good shoulder position, wrist flexion and knee flexion on his lead leg in this beautiful shot.

Up– DCs are usually men or zone types within 10. Find out what they are and attack appropriately. The VT corner that was 1v1 was on the man, and he had to chase a WR all the way down the field through traffic, that’s not easy. Great game lime and great protection here from O-Line.

Up- Van Dyke’s technique looks fluid here too. A bit leaned forward on the weight of him, but wrist flex and knee flex returned to ’21 and UNC form.

Up– You can see that threats #2 and #3 (within WR and the slot) are in the same junction as above. So DB coverage has been filled with miscommunication and now WR routes.

Up– Not his prettiest pitch, stiffer front leg, comes out more of his back foot.

Up– Instead of the useless red zone fade, you have the big guy on the seam for the TD against a linebacker. You’d expect Young to have better ball skills than an inside linebacker, and he does. Good coverage, better catch. Van Dyke ended up with a flexed wrist, couldn’t see his legs because of the line play.

The ‘Canes limited the Hokies to 14 points, but honestly, that’s about as much as their horrible offense used to score. But Miami’s defense now allows just 20.5 PPG on the season, which is 28th in the country.

Steele’s defense came out with six sacks, seven TFLs, two PBUs and rush. The star of the defense was clearly Ahkeem Mesidor, who finished with 3.5 sacks and 3.5 TFL with eight tackles.

Up– Immediately Miami flies a coverage. This time it’s Avantae Williams early. Security normally locks on “#2”, which here is the slot. I have no idea why, but no. 15 runs down the wing route (5 yards inside) up front even though the cornerback was there. That left the center of the field open and a great play.

Up– What you DO like to see is that Williams made up for it and tracked down the play, stripped down and got the ball back.

Up– Bring up six, roll to cover 3, Wells finishes quickly, really on his second read of the progression in the middle of his first hook.

Up– “Containment Wells” of the Canyonero keys. Instead of leaving giant open lanes, the inside DL stays home and closes in on Wells as he tries to escape.

Up– This defender deserves all the movie theater jokes he’s going to get. You can see the moment his OODA Loop dies on him, luckily he didn’t tear his ACL.

Up– Speaking of OODA loops, James Williams’ loop fails when he looks inside the no. 1 when he clearly has the no. #2 (the back) running the arrow path out of the backfield on the net. Mesh is a beautiful thing.

Up– Who’s the left safety that covers 2-3 yards deep in the end zone with no one around? Never go Full Manny, but Steele’s defense went back to Full Manny here, giving up a fourth down with the game on the line.

Up– Flagg misses a goal line, representative of quarterback Grant Wells’ phone booth. Let that sink in. Hard to see, the All-22 end zone would be great here, but I don’t see Flagg’s feet picking up speed again, he just stands there and spins instead. Wells accelerates his feet again and wins.

Tyler Van Dyke ends the game with a beautiful first down and an inside zone read with a wraparound lead blocker for another first down. But the handling of the clock was HORRIBLE on the part of Mario Cristóbal. Cristobal has been a head coach at three schools, two at the Power 5, and he really seems to be just a C game day coach.

Three passes in a row, without lowering the clock to three seconds… I’m just not sure about Cristobal and a growth mindset. His mindset seems very attached to an era of Alabama football in which Bama doesn’t even play, and he’s not the game-day coach that Nick Saban is.

I’m not sure if at this point in Cristobal’s career he can improve that much as a match day coach. He will have to maintain his recruiting skills at the top echelon as he was in Bama and Oregon, and hopefully improve his development both in the weight room, on the track and positionally.